We planned on doing something way blunter than this for bcnparty100. But we ran into the typical issue: lack of time! And had to leave the previous idea for a future hypothetical release.

Then, we thought of doing something quiet, a demo that would depart from the usual technodemo cliches and put new concepts into perspective. Or almost. We definitely didn't want to do something with hard bass drums, but wanted something subtler, more experimental instead.

The first release from Roterfleck was still fresh in our mp3 players, since it had been released a couple of weeks ago. In a way, choosing a song from the compilation for a demo was somehow foreseeable. And after re-listening to the songs several times, we finally agreed on Bauri's "Blue Tuesday".

I can't exactly remember how did we end up with the idea of the ribbons. I think I was just fascinated with the idea of being able to generate so many variations just by randomising several control points in a bezier curve, and watching ribbons grow is simply hypnotising --specially when the randomisation has worked really well--.

Could it be possible to create visuals that, even simple in their concept and execution, would match the music's pace and meaning? For "Blue Tuesday", although featuring a sad title and beginning in a quite obscure manner, sounds decidedly optimistic at the end. Personally what I imagine when I listen to the song is a story where things begin badly and get better progressively. This is what we tried to depict, and that's why this isn't a demo about technical achievements, but something more symbolical instead. 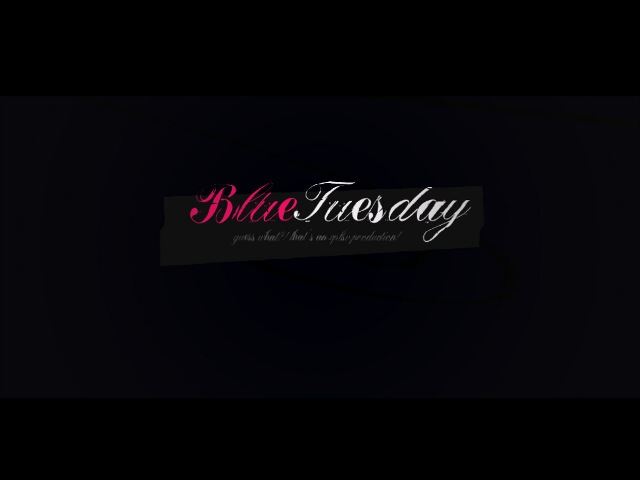 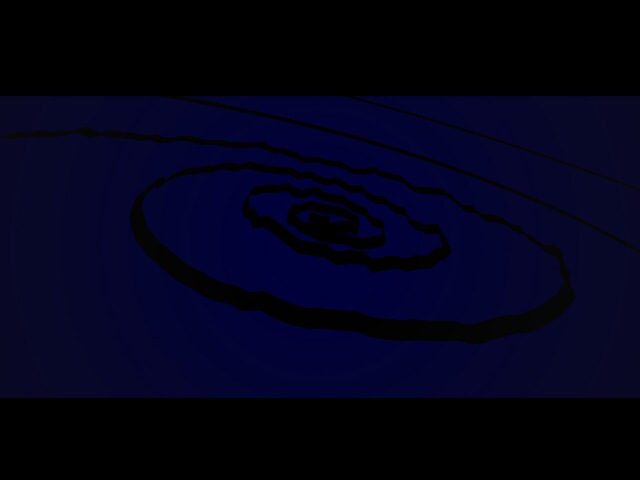 So, as I said above, it begins in a bad mood, with a background whose hue slowly fades to dark blue, and over which a black spiral slowly reveals itself. Credits are shown with interferences, which at the same time are linked to the music (using the at-this-point-classic resource of FFT values). It's all sad and gloomy. The spiral, for me, represents a cheeky whirlwind of trouble falling down from the skies, expanding slowly and graciously propagating bad mojo pulses all the way to the end. The interferences are just another hint at the reigning confusion. 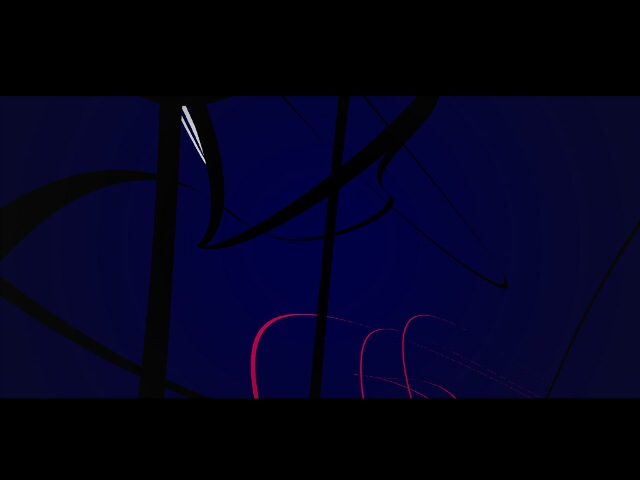 After that, an scene with three growing "nests" of ribbons is shown, each one having a different colour. This might represent three conflicts, or three conflicting views of a problem, all at the same time, sometimes crossing in the boundaries. 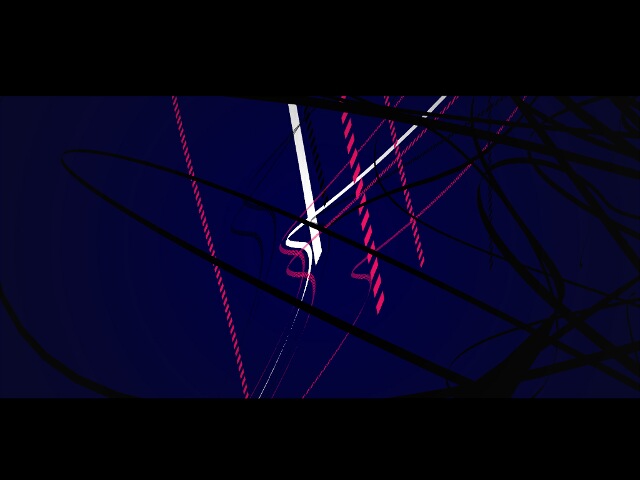 This evolves into a "fly-by" scene where a let's say main ribbon (in white) gets closely followed by several other ribbons. It could represent alternative points of view regarding the same problem -- which we are trying to avoid while at the same time running into it, and which is symbolically depicted as the black ribbons. But it could also represent additional, annoying interference which won't allow anyone to get rid of the conflict. 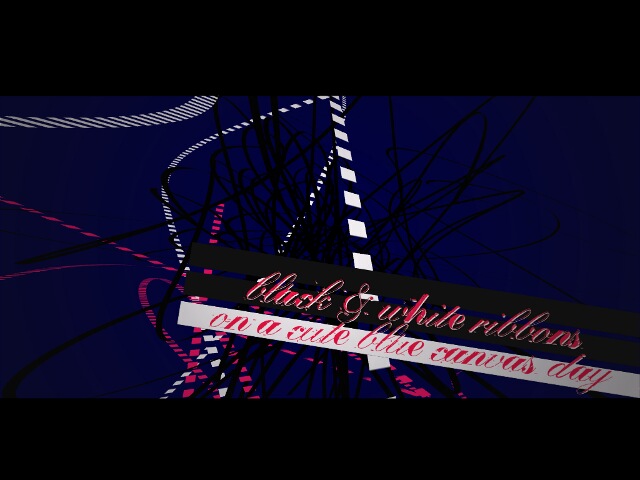 Fade to white and back; things get even busier! Here's an impressive amalgam of conflict and confusion; main points of view (represented by the strong colour lines) surfing between them, not quite sure where to go. But everything has a limit -- even a bad day. This is when the song --and hence the demo-- changes to an optimistic tone. The bass drone slowly fades out, interferences and vibrations also disappear. So the knot of black ribbons begins to untie, and the other lines just undo what they had done until now... all ready for the final scene... 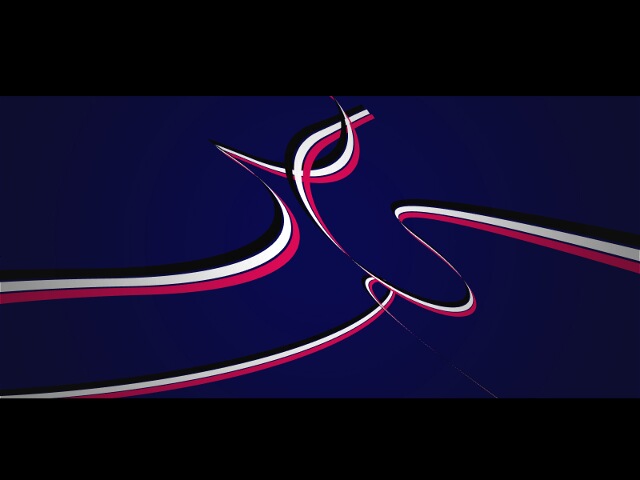 ... in which, at last, things to be marching at a very different pace. Conflict is history: all three colours now march together, albeit with a bit of delay between them, and still a touch of confusion (because of the paths crossing sometimes) but that's life for you! 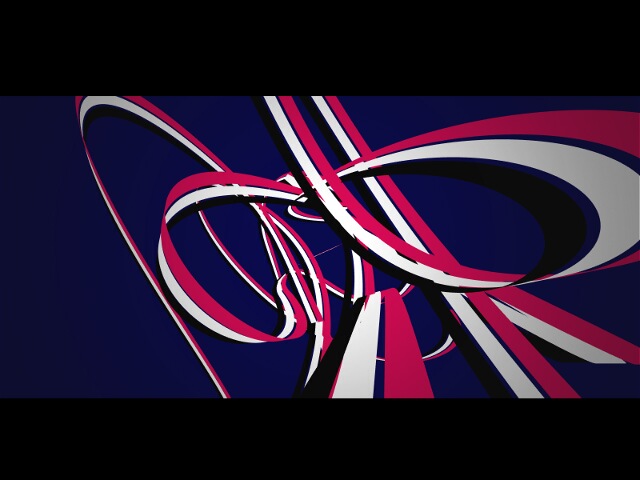 It can get deliciously ribbon-ish here. It's even voluptuous, in a way. A very strong contrast with the weak and fragile ribbons which were shown a few minutes before. 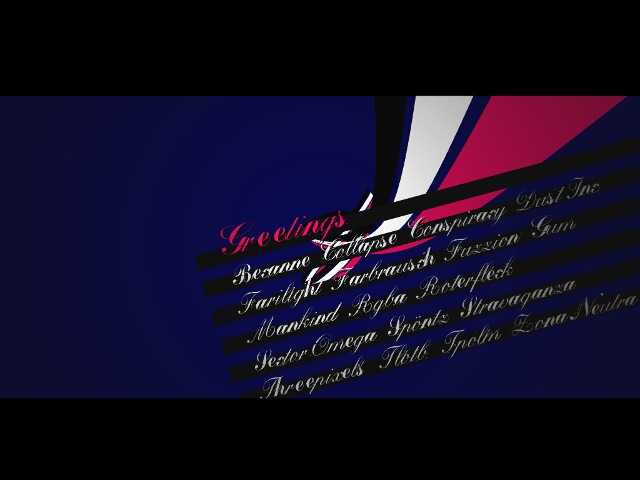 The greets are shown (with an intentionally misspelled "Farilight", just in case you noticed) and finally before you could even expect it, the demo ends, fading to black again, but leaving a taste of hope instead of the sadness that black would apparently imply.