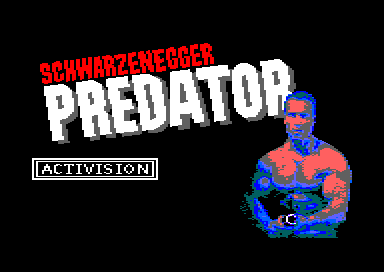 Firstly allow me to confess: I haven't watched the movie in which the game is based (although apparently in a somehow liberal way). So without the background I was a bit lost on the hows and whys, and the game is then just a continuous shoot and run operation. 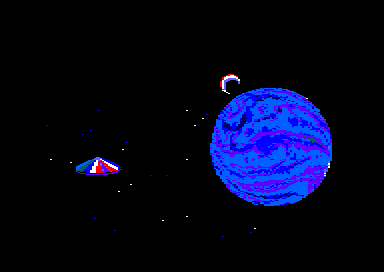 The evil predator approaches our planet with his handy ship

As happens more often than not, the controls are really awkward and don't really help me enjoy the game. The keys to use are Q, W, I, O, P and SPACE in a strange combination that took me a bit to guess:

Not being a super fan of Arnie I don't find the notion of controlling him attractive or rewarding, specially when the end result is so clumsy as this one. 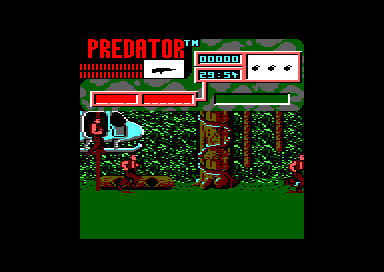 Arnie and mates leaving their helicopter

Or maybe it's just me who's getting old and cranky, but I don't understand what did the Spanish reviewer find so enjoyable about the game. She gives it top marks for Graphics, Addiction and Action, and almost top marks for the sound. Granted, the graphics aren't that bad--if you ignore the fact that all your jungle mates look exactly the same like you (because the use the same sprite that you use), and the fact that all the enemies look the same too, but the graphics don't fill the entire screen, only an square area of which almost half is static content with the pointer, timer, etc. 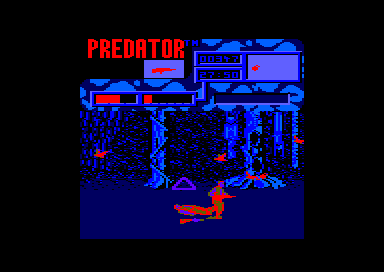 There are nice touches though, such as when the screen takes the point of view of the predator. Then all the colours change to somehow a negative version of them, and a triangular target gets overlayed, menacingly moving around the screen with the evident aim of killing poor Arnie. 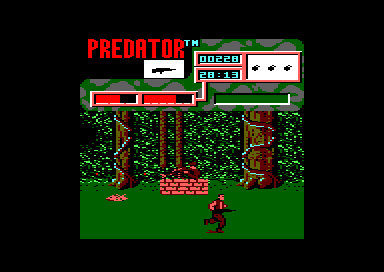 The farthest I reached was when I decided to just run for my life and didn't stop to fire at the enemies (unless there wasn't any other way round). It's not like I reached too far anyway: I didn't even manage to complete the first level.

Once you die, there isn't a game over screen or anything. You just get a blue screen while the level is re-loaded again, and then you're just dropped back to level 1. The Spanish reviewer mentioned this was a bit of a hell when playing the tape version, and I can understand why.

Audio-wise, there are some FX here and there, which are mostly OK, but there isn't music played other than in the main screen. After that it's all guns and helicopters.