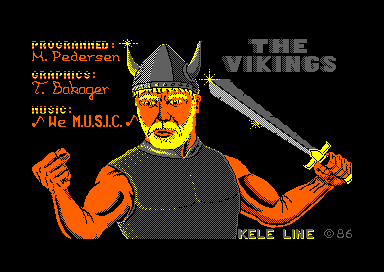 So I had read the review for this game many times, but never got round to play it---because I didn't own a CPC! That review basically said it was a worst than average game, and I wondered whether it was really true or not. There was only a way to find out: play it!

Once downloaded, uncompressed and loaded (using Arnold as described in this article), I finally got to see the screenshot above, which I had only seen in a blurry way before (back when screenshots were literally pictures of the screen!).

After loading you get a screen for selecting the preferred key layout for the game: I M J L Z, Q Z I P, Q W E R T, and the joystick. You have to switch between options using the "Copy" key, which obviously doesn't exist on PCs. But I've found its equivalent is the LEFT ALT key in my keyboard, although it might be the RIGHT one in other emulators. It's a bit of a mess, isn't it?

Thankfully since I've got a joystick I can just press FIRE in the joystick and the game starts playing. If you don't, you can just press the corresponding 'fire" key on the layout you choose. For example, in the case of QWERT, the fire key is "T". 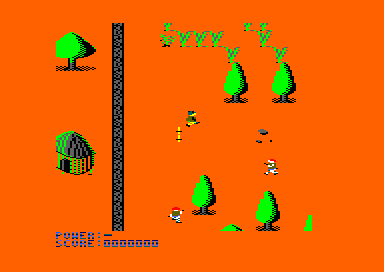 There we are in the game. The main character can move in all directions, which is a nice surprise in 'old platforms'. Unfortunately, there's a lot of flickering on the elements as everything happens too fast. I'm unsure if that's a problem with the emulator, but the most I got to do before being killed is finding a sword (or is it a dagger?) and fire little ghostly copies of the sword (or dagger?) to my enemies. Which meanwhile are firing all sorts of stuff at me, without giving me even time to think. So it's quite a complicated/unplayable game: no wonder the reviews were so hard on it. 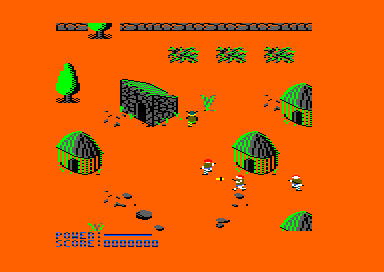 Can I enter the hut? Maybe--if I could learn to control the character!

It's all made even more complicated due to the fact that I am not really sure about what I should be doing in it (although a review for the C64 version at Lemon hints that we need to gather parts of our viking boat), and it's even more more more complicated because the graphics are minuscule. Imagine little graphics on a CPC screen, but then imagine them in a huge 2011 display, at almost 1:1 pixel size. It's hard to play unless you go fullscreen!

Regarding the music, it's not as bad as the Spanish reviewer puts it:

Amateur translation: Sound is composed, exclusively, by a shrilling music that you'd better turn down

Apparently the C64 game was slightly better (if only graphics wise). But the ZZap! review wasn't too benevolent either.

You can download the magazine containing the Spanish review: Amstrad User 34.