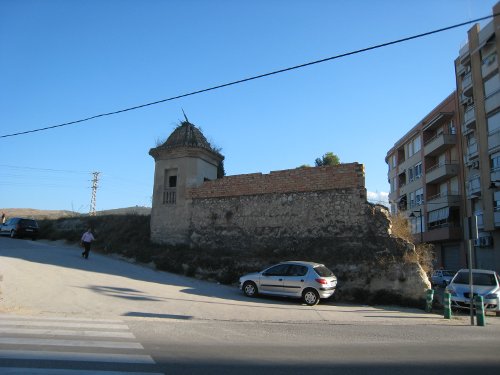 This little sort of tower/observatory is tucked on a corner at the end of Avenida Almaig. Much of the people seem to ignore it in their daily lives, but I think it deserves a bit of attention!

It belongs to the orchard of the Capuchin monastery that used to stand in this area. I haven't been able to find any picture of or information about the monastery itself, but I did find a picture of the towers in their old glory. 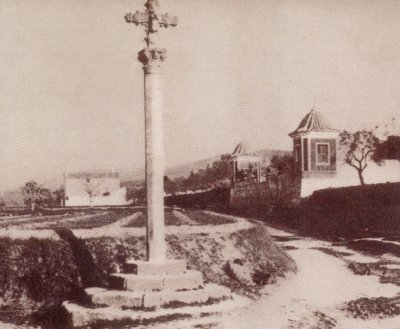 As you can see the companion tower (on the right) was sadly demolished when the grounds were lowered in order to make room for the avenue and surrounding buildings. There's no trace of the cross on foreground either. I seem to recall these crosses were placed on the entrance of towns with certain monastic privileges, but I could be wrong--I should check this fact at some point.

Nowadays the tower is simply abandoned. Ivy and other plants seem on a race to be completely devouring it, and it's also heavily vandalised: the only thing that remains from the door is the hinges, there is lots of graffiti inside, plus lots of rubble and miscellaneous rubbish from what looks like binge drinking sessions inside it. 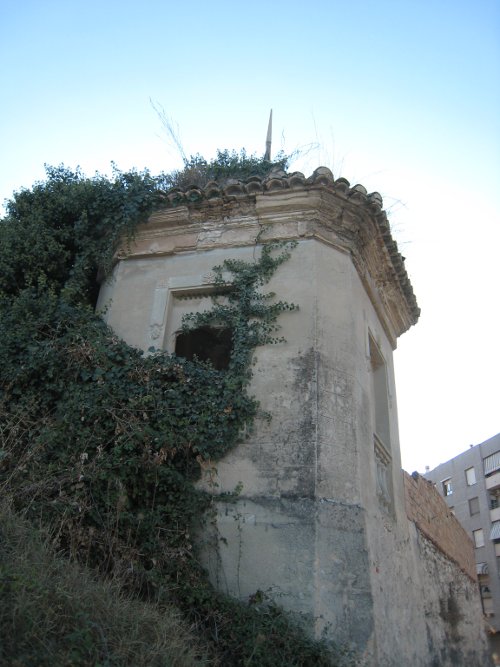 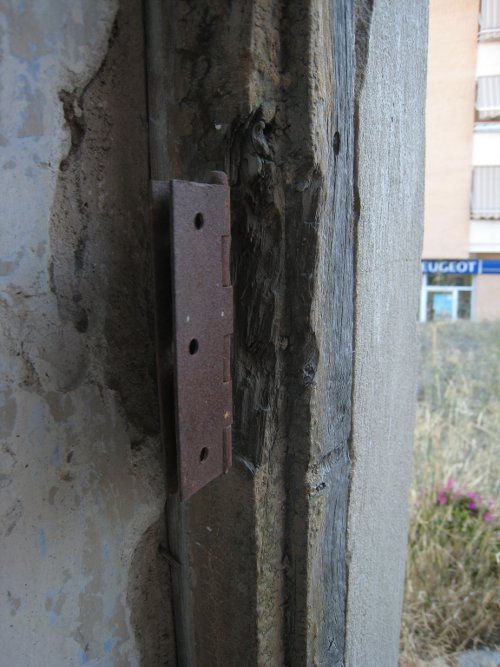 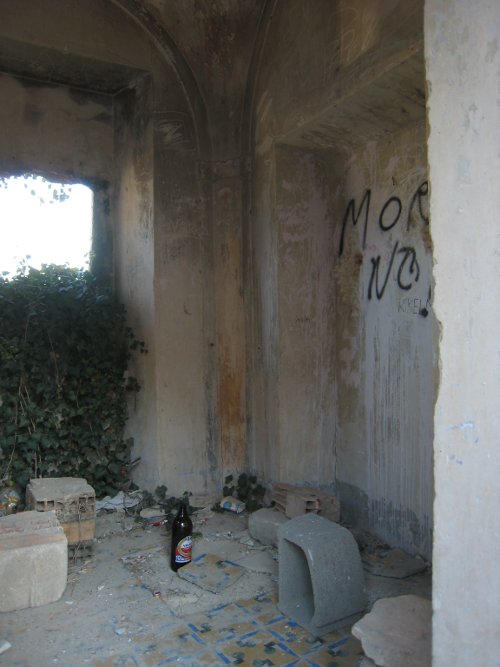 Its roof is also in a terrible state of decay: a hole is growing due to water filtrations, and the old spire is on the verge of breaking down and falling. 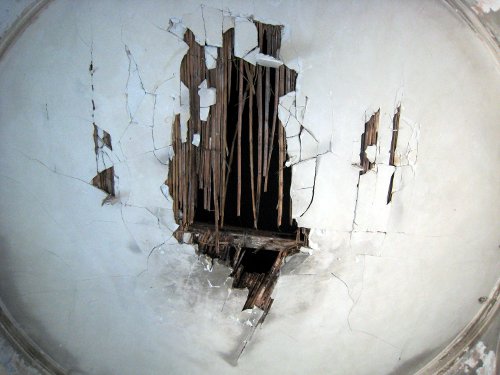 Which is a pity, because the tower actually has nice (albeit austere) decorative details, such as the plastered flowers: 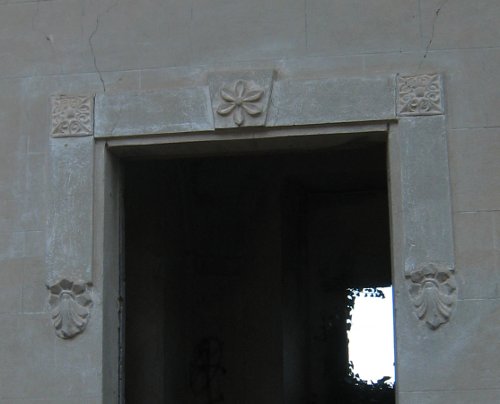 and the ground tiles which are pretty typical of this area: 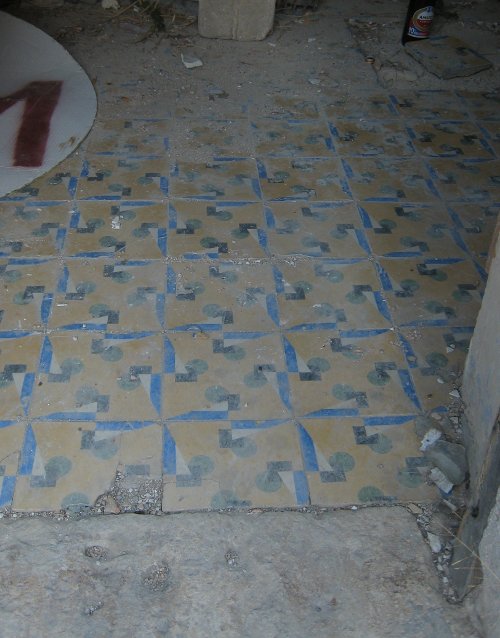 This is a general view of the tower and walls, taken from what remains from the orchard: 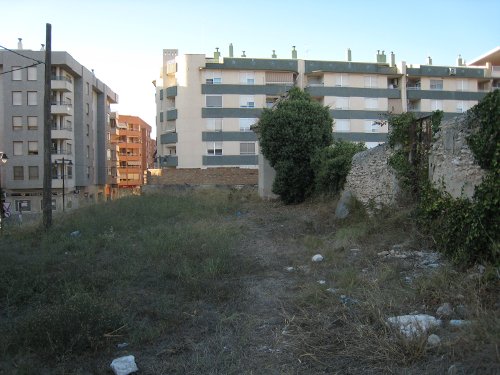 As you can see, nothing but weeds grows here nowadays. Nothing... except for a pomegranate tree which even had some fruits when I visited! 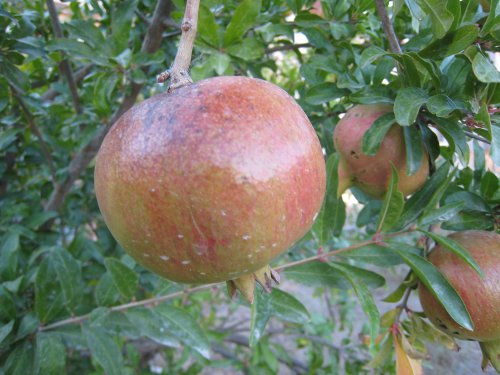 I don't think it's a tree planted by the monks; it seemed too young. I'd say it's sprouted accidentally, thanks to some seeds that happened to find its way to that place. But who knows, I'm not an expert on trees!

The town centre ends pretty much around this area, so the view from the tower would be something like this (were not for the obstructing ivy): 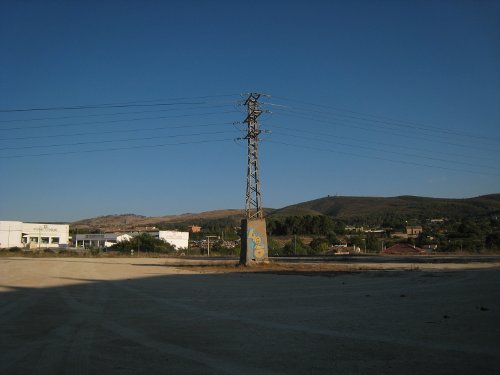 The grounds in the picture are used as a parking lot and for walking dogs (so I had to be careful to avoid stepping over dogpoo). The north ring road is almost immediately below the end of the grounds, separated only by a thin strip of land, which renders them slightly not attractive for building another set of blocks (unless they get proper soundproof insulated windows). I'm betting that's why they haven't built anything here yet, since the space has been used as a parking lot for at least 10 years or more. That, and the electrical tower might have something to do with it too.

The buildings on the right of the tower have been luckier, as there's way more separation between them and the road thanks to an old country house and its trees acting as a barrier. Here's a picture of one of the pine trees under the sunset--a memory of times past by. 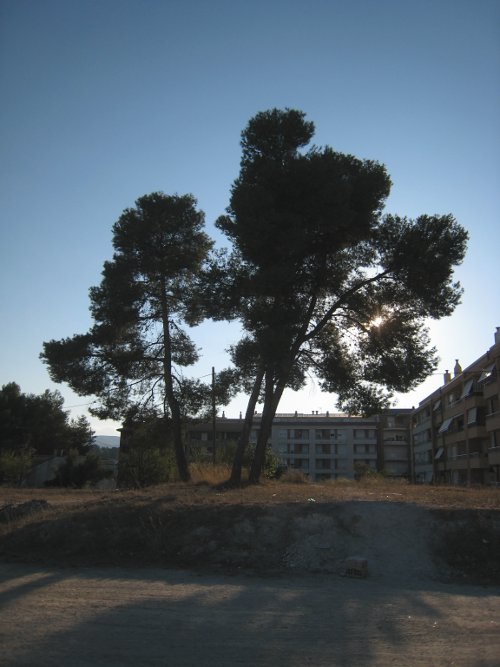