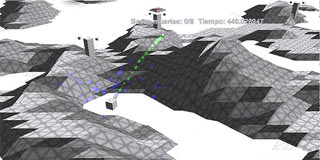 One of my songs (pikapikapolka) has been featured in a little videogame which entered a 48h contest in stratos (a game developer's forum in Spain). Take a look at the game author's blog (although it's in spanish only).

You can/must download the game: Cuby3: la guerra. It is really small, just around 90kb, as javi santana/ethernet (the author) has used lots of procedural generated content, in the 4k/64k intros style, so for example the sound effects are generated just before starting the game, the terrains are also generated, etc, thus it doesn't use too much space in your hard disk :-)

Thanks to Javi for using one of my songs!

By the way it's quite funny that this song was already used in another non-scene thing: I converted it to ringtone (for your own mobile phone!!), as well as the music for scene of the girls demo. Nice to see people likes that song in any context :)