Here goes my after-trip story, as always late and not immediately after coming back (I always need some time to think about it and specially recover myself!!). Warning, it's quite long!! The trip started in a funny party mode way, with lots of djs in the plane (I could count at least four djs checking in their dj record boxes, and they apparently seemed quite heavy, so they didn't look as empty!). It was the most unserious flight I have ever been in, with almost everybody having beers, chatting with the neighbours (even if they didn't know each other!!), the cabin crew saying we weren't funny enough and it was the most boring flight to Ibiza ever, then everybody trying to recover from that captain appreciation and compensate with more cheerings and so on. Like being in a pre-party!

After arriving at Ibiza's port, we had to wait until the first ferry to Formentera, which was at 7.30. Believe me it's quite hard to not to get annoyed when you are carrying a rucksack and everybody is offering you club tickets and free drinks, and more importantly, not allowing you to circulate freely in the street by putting themselves in the middle to make their offers. Yes, I know they are doing their job but come on, did they really believe somebody with a rucksack and an ignore-me-please face was going to their club/bar? It's losing their and my time!

The fun of the examination of the night species seemed infinite, but finally the day came in and the subjects disappeared from the street like vampires. What had been a busy street was now simply an anodine deserted place (with not much junk for my surprise!). We tried to buy our ferry tickets without success. There was somebody selling tickets but she couldn't sell us the tickets for Formentera, it had to be done by her mate. Please somebody explain me why. After some minutes somebody appeared but nobody told us "yes she's going to sell you the tickets"; we had to guess and wait until she felt like working and then ask her, extremely polite and carefully:

Sorry, [didn't want to annoy you, as you don't seem like working today], we [are fucking tired and sleepy and annoyed because of your disorganised and messy service and] were wondering if you would sell us tickets to Formentera, would you please? [Or do we need to do it ourselves?]

Nor did she tell us where should we look for the boat. Maybe she thought we were professional magicians and could guess or something. Best of all, everybody seemed offended when asked, even the port police.

But they didn't manage to ruin our first day! We quickly forgot them and proceeded to rent a pair of bikes upon arriving to Formentera, in La Savina port. I was a bit scared at the beginning since I thought we weren't going to find any place to rent bikes so early in the morning (it was around 8.30 am) but my fears were unfounded, there were lots of places which rented every kind of vehicle: bikes, motorbikes, cars, so you can get a vehicle quickly there. 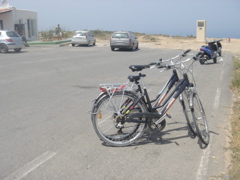 With our bikes and rucksacks and lots of determination we took to the road and started cycling the 9 km to the apartment we had rented, in the middle of the island. It was pretty ok even if I hadn't ridden a bike since past year and wearing some extra kg on my back. We could smell the pinetrees and the figtrees and also use our brand new sunglasses to avoid mosquitos and other species which resulted surprised because of our fast paced cycling. Oh yeah!

Then we arrived and left our baggage, changed to the summer-mode clothes (bath wear, short trousers, flip flops) and straight to the beach. It was like the start of a cycle, since we repeated it lots of times during the following 14 days, which was quite convenient for our general tanning level (now we must be between the most admired people in London, see Dannii Minogue's words about the londoners' taning levels). 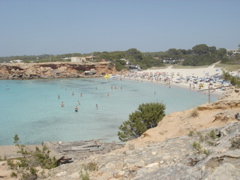 Apart from getting a pretty decent suntan we also managed to explore the island. In our explorations we concluded the following about beaches:

We also got some more interesting facts: 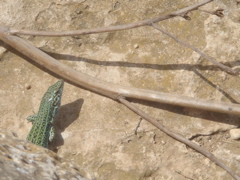 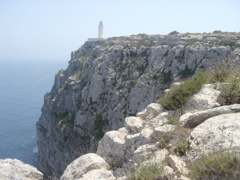 Although the island is mainly flat, there are two points which are not. One is the port in El Pilar road. Think of some five kilometers of horrible neverending uphill curves (for going) and suicide downhill curves (for coming back). Specially super-exciting at night. Nothing compares that omfg-this-is-dangerous-i-am-going-to-die-in-a-curve sensation. 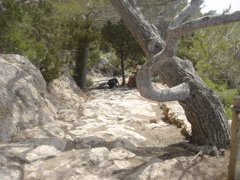 There's a shortcut called cami de Sa Pujada. This is a supposedly roman path, or I might say, it supposedly is a path, since it is most of the time pure mountain stone and is more like climbing a mountain than walking on a path. But hey it doesn't have curves! After climbing it, and some more road km, you can see that beatiful village that is el Pilar de la Mola, with its mill, and some km further, the Far d'es Pilar, a little lighthouse. 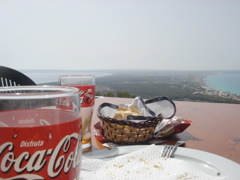 You can also have some refreshments in an impressive views restaurant, El Mirador. And believe me you'll feel like in heaven having a refreshment when you reach that point. 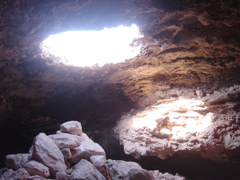 The other hilly place is the Cap de Barbaria area, on the other side of the island, where the Far de Barbaria is. This was really hard to reach; I had to walk most of the time since it was imposssible to do it by cycling. But as a compensation you get to see Sa Cova Foradada, which is one of Formentera's mighty caves, and has been featured in the Sex and Lucia movie.

There were supposedly some megalithic ruins in the way to the Cap de Barbaria but we couldn't find them even if we turned left, exactly where the signal specified. Maybe we stepped over them and didn't notice, who knows! 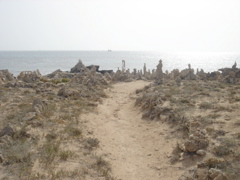 Now that's an interesting and weird place to go. At the end of Platja Illetes, keep walking and walking, climb as many hills as you need to, until you start viewing what appear to be static human figures - although they aren't so.

What they are is a collection of statues and weird stone heaps which visitors have built years, and they look quite weird indeed. Seems like people consider that place as magical so they decided to leave they little magical thingies there. 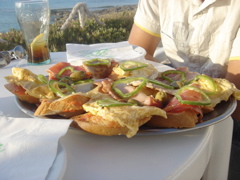 Ibiza might have its Cafe del Mar, but Formentera has Can Rafalet in Es Calo. You can also enjoy the sunset in Formentera. But instead of listening to some ambient/chill out music by Jose Padilla you can treat yourself to "Pa amb coses" - literally "Bread with things", and get an idea of the typical gastronomy of the island. Very easy recipe as well, using the key ingredients: bread, garlic, tomato and olive oil. 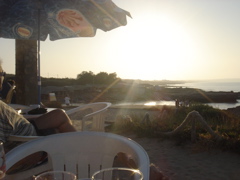 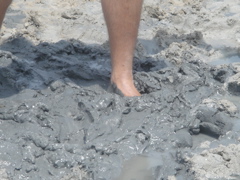 Yes, there's something else we did! Without any special order:

Should you go to Formentera?

What do you think?!