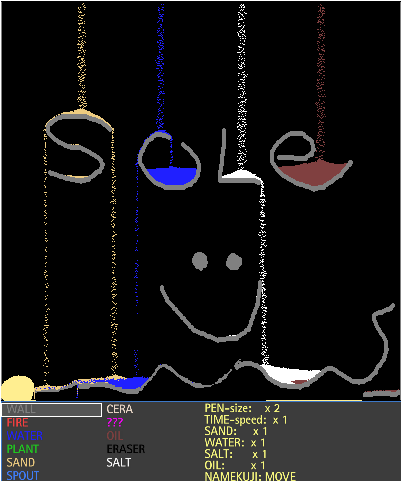 Here you have a little java application called Hell of Sand (which is standard java, it ran smoothly on my mac) to play with various sand and water generators, walls and more curious things, like that ball which runs around the screen eating part of what touchs.

It somehow reminds me to Lemmings, you know, that superaddictive game in which you had to save hundreds of little creatures of commiting suicide in a very stupid way. Excepting that now you don't have to save anyone... well... your time, maybe.

Relaxing or stressing? You decide...

PD I was going to give you a link to the DHTML Lemmings version but seems that the author has been accused of copyright infrigement. Another stupid case of copyright killing the people's talents and rights...

Instead of the game you find a big pumpkin there with a dead lemming on background, and an explanation of what has happened and the ridiculous status in which the game copyright holder is defined. Basicly, the poor programmer does not know for sure who is the real owner of the copyright, then he can't ask for permission to use the Lemmings idea because he doesn't know who to ask.

It would be so nice if some talented graphicians could help him to re-release their game with pumpkins instead of lemmings :)
All the best for him!