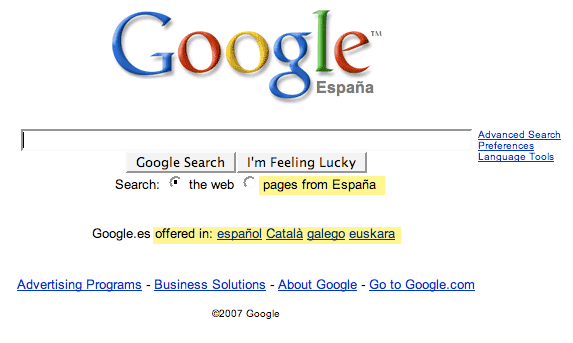 As if it wasn't enough to have to avoid not saying terms in English while speaking to Spanish people, Google mixes up everything for me to add to the confusion!

I guess that's the result of it autodetecting my browser's language plus redirecting to google.es because I'm using an spanish ip (obviously, due to the fact that I'm in Spain for some days). I think I would be happy with the language mix up (although it looks decidedly weird) but the redirections are very confusing.

Specially when you're in one country (say, UK), a friend (in Spain) tells you to look for something which appears in a certain position in his Google results and you just get completely different results because you got redirected to .co.uk and he went to .es

Not that it's specially important but it's disturbing nevertheless. In a way it looks as if their templates have hard coded English values but the variables are translated... and I could also moan about accessibility issues but blah... I'm on holidays! ;-)