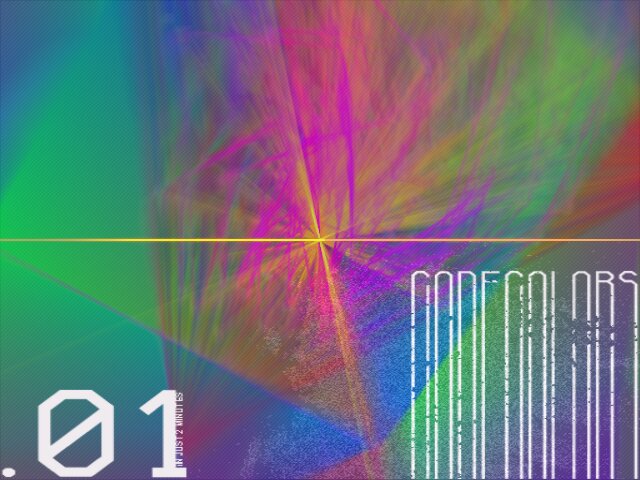 As they always say, good things always come in threes (or in Spanish: ¡No hay dos sin tres!). So here's the third batch of demo sources! This time it's the turn for PPG05: Codecolors. The only demo that will fully test your monitor's ability to display the full gamut of colors, by showing them all at the same time!

Best of all, it's even captured to HD video so that you can watch it in glorious High Definition. It can't get any better. Or maybe you can -- if you do anything with the code, as always, let me know!

I have also changed a bit the way the builds are done and tidied the root folder up. Now both the Mac and Linux versions of BASS dynamic library are in the src/bass folder, and get copied to the right destination only if needed. There's also support for building the Mac bundles right from the command line, thanks to an awesome bundle.sh script which the guys from glfw did and that I modified in order to include an icon too. So you don't need to mess with XCode and its awkward project settings for compiling, and everything can be done from the Makefile. Hooray!

I still have to update the Makefile for PPG01 so that it generates Mac builds and also follows the same location for BASS that these latest builds use, but I'll probably do it tomorrow. My eyelids won't allow me to do it now, I'm afraid!