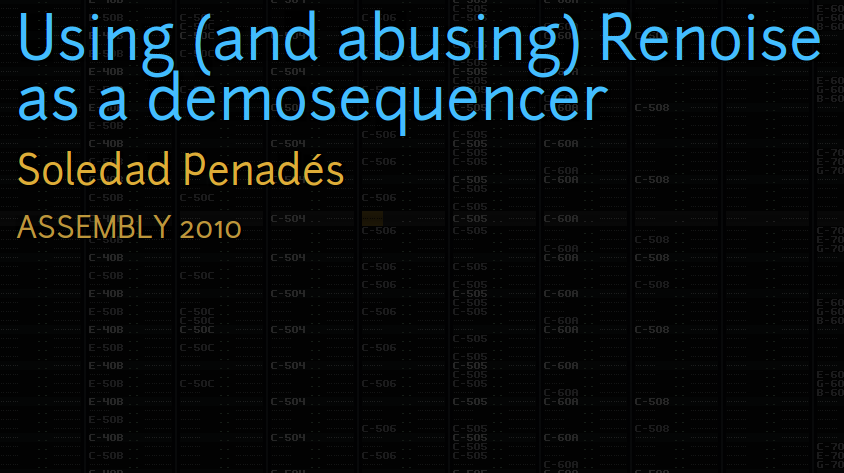 I'm going to be giving a lecture at Assembly Summer 2010's ArtTech seminars. The topic is about something that I've been working on, on and off, for the past five years: better synchronising in demos, but specifically applied to Renoise. The seminar is scheduled for Saturday 7th August at 16h, and if I told you I'm not excited I would lie! (I don't have a clue about the seminar being streamed live, I think they are recorded).

Going to Assembly always manages to induce an strange, mighty state in my mind, where I can't but think about all the great demos that have been released in that party and wonder about what's about to happen this year. It's sort of magic.

It's even more unnerving when I think about all the amazing speakers with whom I'm sharing the seminars timetable: Smash/Fairlight, Navis/ASD, mr.doob, Simppa/Evoflash, Preacher/Traction, Melwyn/Scene.org, Visy/Trilobit... here's the full list of speakers and sessions. I can't really remember who were there the last (and first) time I went to Assembly, back in 2007, but this year's line up is truly impressive.

There are lots more of exciting things in this year's Assembly, such as the preview of the demoscene documentary (Future Crew chapter), which I'd like to see anyway, even if it's just in Finnish. Also Syphus is going to be the ASM TV host and I believe Okkie is going to be involved too, so I'm just looking forward to watching those two showmen live :-P

Now, back to polish the slides, which by the way are made with HTML5 + CSS3 + pure JS, no jQuery... who needs Keynotes or Powerpoints? :-)