I just read that past Monday was "Quit Facebook Day". Bad timing guys, it was Bank Holiday here in the UK, and I'm pretty sure people spend more time browsing Facebook while they are in the office that when they are holidaying. So come the first of June, and no one remembers about promises for the day before.

Anyway, I had --as a friend described it-- nuked my Facebook account a month and a bit ago, after having to dive into several quite hidden pages, fill in two captchas, re-enter my password and promise I really, really, really, REALLY wanted to delete the account. 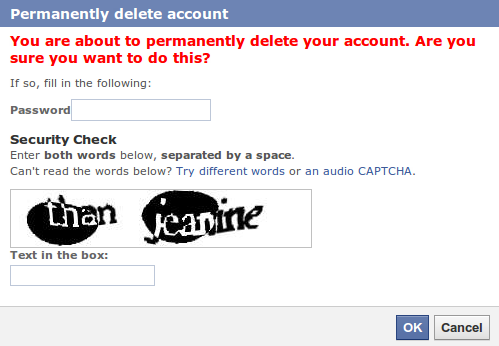 And I find it quite liberating. Although I don't believe they have deleted anything at all (instead they have simply set the 'deleted' flag to true), it's great to feel totally disconnected. I'm not an active node in their potential advertising targets database. I won't have nasty surprises every year, when they decide to open a little bit more of data so that it's crawled by Google and they get more advertising revenue thanks to my actions.

Also, it's fantastic when you meet someone, physically, face to face. People filter everything irrelevant and only talk to you about interesting stuff that they did or that happened to them; they won't detail to me how many videos they have posted and how many news they have linked to and how many status messages they have liked in the last three hours. Truth is, I don't need to know that. Those things are actually irrelevant to me. And since I'm an average person, it's quite possible that they are irrelevant to you as well. Think about it.

Besides, I don't want to be held accomplice of the 'friend' and 'like' terms depreciation. I can't have one hundred or more friends. No one can have so many friends, actually. Plus this total alienation of the 'dislike' term seems like an attempt to implement Newspeak amongst web users, and my love for words can't repudiate that tactic more vehemently.

But 'deleting' the account is not enough: there are now thousands of web sites that are following the 'Facebook like' buttons trend, and will show one of those annoying buttons at the bottom of each article they post, so that you can 'like' the article (never dislike it). Those buttons are served directly from Facebook's servers and as such are a great tracking device: if you're logged in and visit those sites, Facebook can take note and add it to your profile, so that advertisers know that you also visit websites X, Y and Z.

Since I didn't want to get redirected to any Facebook page while the designated 14 days for 'deleting' an account lasted (which would therefore reactivate my account and force me to start again), I added the following rules to my /etc/hosts file:

... and it redirects every request to my computer.

The requested paths don't actually exist in my computer, so it's easy to spot where the 'like' buttons and Facebook widgets would have been: I get ugly "Not found" messages instead. But this is reassuring: it proves that the rule works and it's yet another futile tracking attempt truncated by the mighty power of /etc/hosts!

Don't feel terrified by the 'Facebook void'. You know, before it existed and sucked everyone up into their massive data-centers, people did communicate. There's e-mail, IM, SMS, phones, snail mail, or if you're into that sort of thing, you could even use a fax or a telex!

There's also the diaspora project which is meant to be an alternative to Facebook, but although it looks like a good idea, I'm not sure how it is going to work when some non-tech-savvy people want their own server, not a public wordpress.com-like server. Still, it's a step in the right direction: to take back our data.