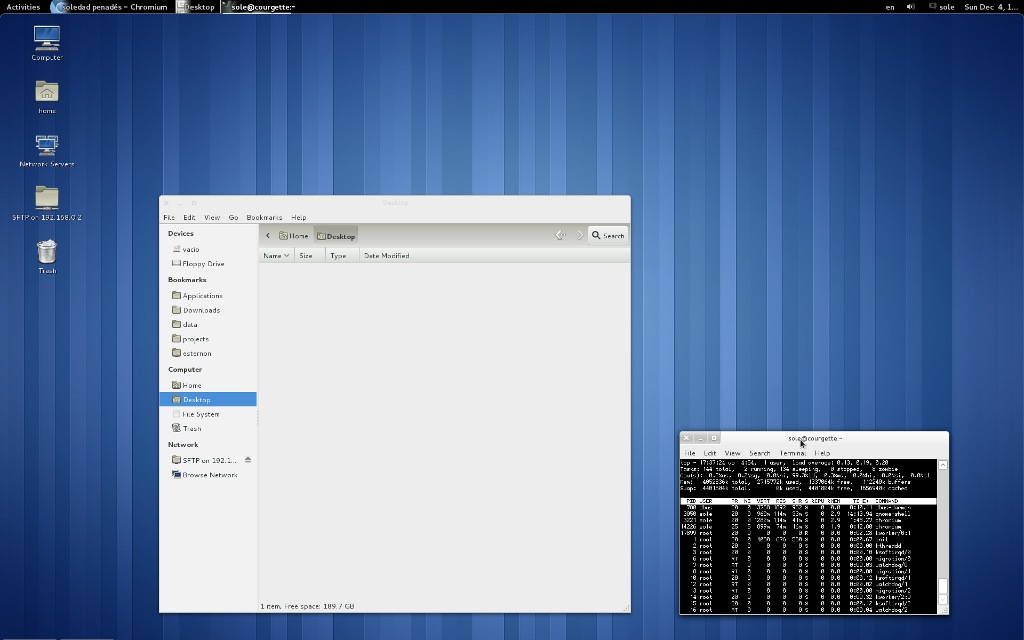 I finally succumbed to temptation and installed GNOME 3 on my machine.

I was slightly worried that it would end up breaking everything, but it did work quite nicely, and once I installed gnome-session, the option for starting a GNOME session appeared at the login window, along with the existing XFCE session.

So--first impression: confusing. Thankfully mr.doob had demonstrated GNOME 3 on his laptop several times (although he was testing Fedora and Ubuntu, not ArchLinux), so I roughly knew how to navigate the system. The key is to use precisely that--the keyboard. Forget ye good old Applications menu and start launching stuff in the Quiksilver/GNOME Do style, by invoking the "launcher" and then typing the name of the application you want to run. Using the mouse feels quite slow.

The next step has been launching my commonly used programs to make sure they kept working. They did! More things that worked well or even better than with XFCE or old Ubuntu:

The remaining step was, evidently, customising the rest of the system to my liking. I made a list of things I was missing, and in a matter of minutes they were sorted out (!!!), thanks to a bit of gconf-editor and the awesomeness of the Shell extensions website plus its one-click install method. Apart from it being incredibly rewarding, I guess that's what happens when you wait and leave some time before hopping on the novelty bandwagon: somebody else will have written the extension you need already.

The annoyances "I" fixed:

I also dabbled with the Dock extension before installing the Window list extension, but it annoyed me that it wasn't visible all the time and I couldn't configure it in an intuitive obvious way, so I disabled it.

Overall, I like GNOME 3 once I changed all those details to suit my tastes, but I'd like to be able to right click over things and access their configuration instead of going through arcane settings trees à la Windows Registry. That's quite awful, and there is no official documentation on this, or at least it's not visible in the obvious places. As an example, there's no obvious explanation on how to install and enable an extension in the GNOME extensions wiki page. While the process is somewhat easy if installing extensions with the website, it took me a few minutes until I found that method, and even then I wasn't sure it would work. This issue is present in pretty much all open source projects anyway: bragging about a project, but not explaining how to install/start it.

That aside, GNOME 3 feels great and fluid, even if I'm using the nouveau driver. I feared it would require me to install the proprietary nvidia driver, but it works quite well with the free driver, which is excellent news. The only graphical oddity I've found is with the sushi previewer; it does some sort of jerky window relocation on start which I don't know if it's because of the graphics driver or because of sushi itself.

Conclusion: I'm going to stay with GNOME 3, as XFCE is not as mature as I'd wish it to be, and GNOME 3 seems to perform quite well (plus I've always liked the GNOME Do style of launching stuff, and being able to write extensions in Javascript is one of the best ideas for desktop environments).

I'm also looking forward to installing ArchLinux + GNOME 3 on my laptop (which is currently still running Ubuntu 10.10 :-D). Hopefully the brightness keys will work there too!