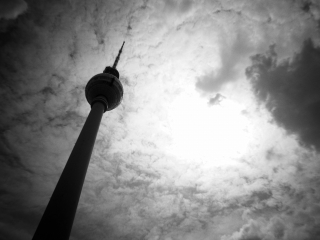 The pictures from my first trip to Berlin are online now.

This time, I decided to experiment with post-processing instead of simply uploading the pictures as they came from the camera. Nothing too fancy, just playing with a couple of GIMP plug-ins, essential actions such as adjusting brightness and contrast, and of course realigning pictures (as I take slightly tilted pictures all the time, but not on purpose, as you can imagine). I also used RawTherapee to process the RAW files. It's absolutely my favourite RAW editor.

I chose this black and white finish because that's what Berlin inspired me. There's this strong sense of the past still being present, even in a violent manner, and still it's somehow very much like a spirit trying to free itself from old considerations. There's a tension all over the place between legacy and modernity, even if apparently Berliners carefully tiptoe over the dividing line and seem to ignore said tension, or perhaps they are simply internalising the conflict and transforming it into something else; maybe that's why there are so many sprawls of graffiti and artsy inspiring stuff all over the city, often in the most unexpected corners. Some places were just immensely sad while others were so lively and energising...!

And before you ask: no, I didn't attempt to sketch anything serious on this trip, as it was quite short and I still had to finish the London-NY sketchbook.

Now that I finished this (I've had to postpone it for months), I am finally free to fix Nerdstalgia. I think I found the source of all the troubles I'm having with certain phones (namely that the app doesn't work at all, grrr). If that doesn't work I don't know what else I'll do! Double grrr!