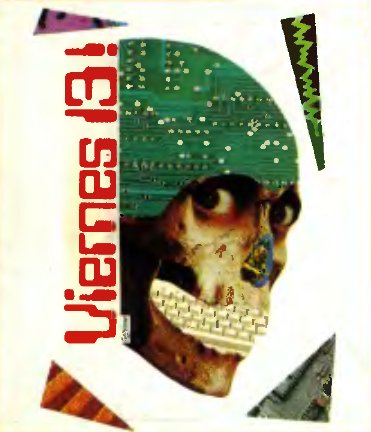 Call me whatever you want to call me, but whenever I hear "Friday the 13th", I immediately think of the image above. It was on the front cover of a computer magazine back in 1990 (download it here). Computer viruses (virii?) had just become immensely popular in Spain thanks to the fact that

... triggering a massive, hysterical coverage in newspapers and TV (a moderate example, and more results from the archive).

The most popular virus in Spain was "Friday the 13th", nicknamed Viernes 13 in Spanish (hence the image header). I always found incredibly funny that one of the removal tools was called "Sábado 14" ("Saturday the 14th").

That collaged computer corpse became my computing nightmare. It was a terrifying symbol: what we could end up looking like if we allowed those malicious (and mysterious) virus take over the world.

In my naivety, it scared me in more than one way. For some months I tended to attribute every strange computer behaviour to virus, even if we were simply using an Amstrad PCW, without modem or anything remotely similar, didn't know anyone else with a machine like this one and thus did never, ever, pirate software. All the software we used was either expensively original back then, or typed from magazine listings, so we had a very low chance of a virus getting into that machine. Taking aside the fact that it didn't have a hard drive, of course.

That didn't matter: I suspected that the computer might have got infected somehow. Locoscript making strange things? It might have been a virus. The last line of the screen filled with strange garbage? (it tended to randomly display "~" characters when you pressed a key while the printer was working). It surely was a virus, and the ~ messages were its output. The keys didn't work properly? (because they were mechanically jammed). A virus, no doubt!

We even discussed virus at school. I mean, just imagine 80's kids, nine or ten years old, discussing virus on the morning break. Speculating whether this or that thing that happened when you turned on the video recorder could possibly be a virus. Mental!

I didn't see "a real virus" until we got a PC, and I started to exchange software with more kids in the computers classroom. Even though, those were quite mild infections. Maybe I wasn't a very dedicated pirate? I remember only four or three viruses we got: Brain, Stoned and that one featuring a bouncing ball.

I recall using a couple of command line tools to get rid of the virus. You first had to run SCAN.EXE and then there was another tool (CLEAN.EXE?) for removing the virus. That was the first "proper" antivirus I used (it seems those were the early beginnings of the McAfee antivirus family). Prior to that, the solutions consisted in running an specific tool for each virus you wanted to remove, or some funny ideas such as making sure the computer was turned off on the day the virus would turn on its payload, or formatting hard drives at low level. That could take ages, and those disks had just 20 megabytes!

Still, those virus were moderately curious in a way, like little pesky creatures that had just arrived into your computer by chance. Annoying, yes, but an unexpected, surprising phenomenon nevertheless. The arrival of the Internet changed things for bad in this field, boooo!