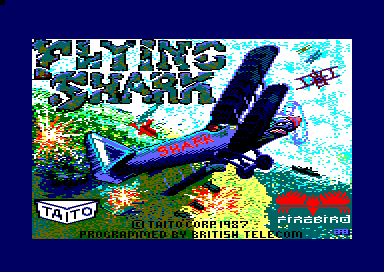 We get this nice looking screen and this will be the most spectacular it will get, because the rest of the game is pretty limited palette-wise... and in other aspects that I'll mention in a moment. 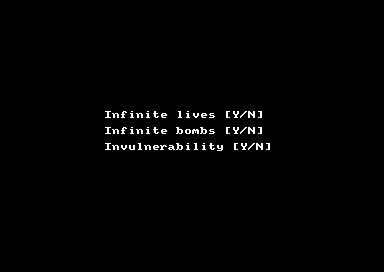 The good thing of playing emulated games is they often have had their copy protection systems removed and also quite frequently the cracker inserted a few cheats so the game becomes easier to play for us who do not have all the time in the world to become used to a new game. I of course said yes to all these cheats because I care more about the art and the music than completing a 30 year old game without cheats :-P 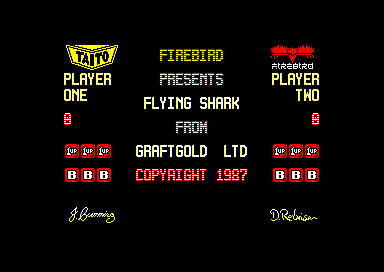 This game is a port from an arcade game originally called 飛翔鮫 or Hishōzame, Wikipedia tells me. It was originally developed by Toaplan and published by Taito in Japan. But then the arcade machine versionwas published by other companies in other countries, and when it comes to porting, each platform was ported by different companies. The presentation screen above reflects perfectly the confusion you'll feel if you start researching about who actually made this game. And to make it even better, it was titled slightly differently depending on the market: Flying Shark in Europe, or Sky Shark in the USA. And so on. Essentially, I see the screen above and I can only think: too many cooks. So confusing.

But on to the game---it's a vertical top down shooter, which means the stage scrolls upwards, while you fly a little biplane that shoots oversized bullets, and try to knock down all the things attacking you, of which there are many. 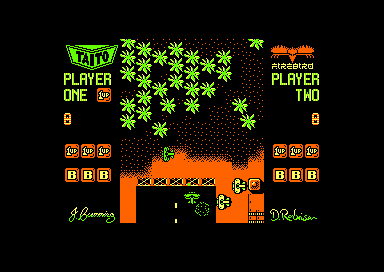 I've no idea about the keyboard layout; I set up the joystick in my emulator and pressed "Fire 1" to start, and then started playing.

At the beginning you have a miserable single bullet firing power. Later on, due to something I picked, it upgrades to two and three bullets at the same time. I couldn't make it go to four. Each stage consists in our plane taking off from our base, going through the dangerous jungle with all the enemies, then flying over some watery areas, and we go back to land on our base (or another base, it's not clear to me if we're flying in circles, and I've certainly not read the user manual, if there's any). You can pick things like Power UPs and B and S but I'm not sure if the B is a bomb or a bonus. At the end of the stage you certainly get bonus point per each picked B, so I'm inclined to think it's just a bonus... You can also hold down the fire button to get a bomb dropped, which destroys almost all the enemies on the screen.

The graphics are functional and kind of cute. There's lot of clever sprite reusing to form structures with variation. Even if the game is fairly simple, it doesn't feel repetitive. Some of the colour combinations remind me a lot to CGA palettes.

The difference between stages is the palette colours are different, and they get slightly more complicated, meaning there are more enemies and shorter intervals between them. Although at times I'm just flying around wondering what's going to happen because nothing seems to happen and the only thing I can hear is the monotonous drone of my engine, I guess. Sometimes I won't be able to fire any more bullets although I can keep controlling the plane - that's because we're approaching the end of the stage. Stages finish without little more ado than that; there doesn't seem to be any major end of level enemy.

With regards to the sound aspect of the game, there is a repetitive introductory music played on the presentation screen and the screens between stages. And then there are three main sounds in the game:

There's no background music, although all things considered, it's maybe for the better so you can add whatever music you feel like while playing and it won't clash with the non-existing game music. After a while it becomes somehow hypnotic and despite the game not being too spectacular, it gets sort of addictive.

The game lags a bit, the scroll isn't perfect (although it might be due to the emulator, so I'm willing to cut it a lot of slack), but the functional graphics plus the somewhat hypnotic sound effects combine together to make a good de-stresser, specially taking into account that there doesn't seem to be an end and it just loops forever. Recommended for days in which your brain just needs some simple repetitive action.