My main computer is a PC I assembled myself two years ago. While I don't like fixing somebody else's computer, I quite enjoy fine-tuning mine and learning about it in the process. It is a bit of a beast (for my purposes) with a Quad Core and lots of memory, hard disk bays (I never have enough space!), and etc. I'm quite happy with it but I still consider it a work in progress, specially because of one outstanding problem: NOISE!

When I first assembled it, the default settings from the motherboard were set to have all the fans spinning at maximum power, and the CPU was set to work at maximum speed as well. It was a bit like having a jet engine under the table. Then I learnt that these things could be configured in the BIOS, and after a BIOS upgrade, I managed to convince the motherboard to behave a little bit more reasonably and slow down both the fans and the CPU, but using the latter "on demand", which means it can accelerate when the operating system requires more crunching power.

That improved things a lot, but there was still too much noise for my ears (I like to hear myself think, so to say). I investigated a bit more and found that unless I played 3D games with the computer, which I never do, I really didn't need to have so many chassis fans working. So I disconnected two of them and the noise went down even further, but it was still quite noticeable.

I investigated a bit more and found that not all fans are the same. I guess it's not that surprising if you think about it, but we rarely pay attention to computer fans. They are just there, rotating, and that's all we know about them. But there's a lot to be written about fans. The cheapest ones do the job but at the cost of noise and extra energy consumption; the more expensive ones are better engineered, have better airflow and make less noise and consume less energy because they can move more air with slower speeds. 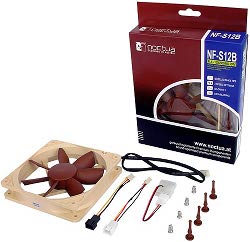 So once I found about that, I replaced the rear fan (the tower exhaust) with a noctua fan. It is virtually silent, apart from being cream-coloured and having a very strange installation method with rubber 'screws' that got on my nerves, but supposedly reduces vibration noise. This improved things a lot, but...

We've been experiencing an incredible hot weather for the last days here in London. I mean, 25 degrees! A heatwave! While that's fine for me (after all, I grew in a place where 38ºC in summer were the norm), it isn't that nice when you've got the computer turned on pretty much 24/7, because the fans are at such hard work that you can know when the computer is doing anything CPU-intensive just by listening to the fan noise. 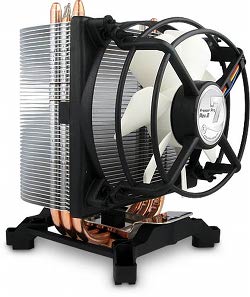 It turns out the stock CPU coolers, supplied by Intel, are simply "good enough" to prevent your CPU from melting. But they aren't really that good efficiency and quietness wise. The sensors reported around 65ºC in the CPU, which seemed a lot to me (as a friend said: you could fry an egg there!!). So I decided it was time for an improvement in that area (either that, or buying a ton of paracetamol for the headaches). I chose the Freezer 7 Pro R2 cooler from Arctic Cooler, mostly because it seemed quite good but also because it wasn't insanely expensive. And it's been the best decision this year, I think!

Nice video (not by me), showing how to install it; the default stock CPU cooler is shown as well

Once I installed it and re-plugged everything I had to unplug (because it's somehow bulky and requires you to make room for it in the motherboard) I couldn't stop looking at the computer, side panel still not installed just in case, and wondering: but is it really working? Indeed it was! I opened three chrome instances with mrdoob's javascript experiments while also encoding a video in another program and you could barely hear the fan. It was fantastic!

And not only there is a lot less noise now, but the readings report healthier values from the inside: the CPU reports around ~40ºC now. It's an amazing drop of temperature: more than 20 degrees!

In a way, it was kind of expectable: the design of this cooler makes way more sense to me, compared to the stock one: instead of expelling air towards the side of the box (which doesn't quite work that well unless you've got one of those tube sleeves for channelling CPU hot air) it uses the fan for moving cold air from the front of the box through the dissipation fins and towards the back of the box. The (silent) chassis rear fan makes the rest. Also, this fan is larger, which makes a lower frequency hum and also moves more air at lower speeds.

Both the graphics card and the memory use passive dissipation already, with no moving parts whatsoever, and the hard disk noises don't bother that much as to replace them with SSD drives, so I'll leave them for the time being. Oh, and I use the DVD drive like... twice a year? So it really doesn't make much noise.

At some point I might replace the front fan, which I suspect is the reason of some sporadic humming I can hear, with one of those silent noctua fans. But it's slightly cumbersome to reach the front panel, and it doesn't annoy me that much unless I look at it and see its horribly tacky and kitsch blue LED light.

Therefore, there's only the power supply left. I'd like to get one which is not only quiet and green (energy wise), but is also modular, so that you only connect the SATA/IDE/power cables you really need, and don't end up with a lot of unused cables hanging from the power supply. But that will probably wait until next year.

Software wise, I am looking into ways to underclock the system, since I don't really use that much power generally. It seems that at least the graphics card clock and memory can be slowed down, but in my tests the settings I entered were reset to the default speed on each reboot, and besides, I couldn't notice any difference, so I wonder if the settings really changed anything or not.

On the computer's CPU front, it is currently set to "On demand", and there's a range of speeds I can choose, from 1.60 GHz to 2.4 GHz. I wonder if it could even work at lower speeds but still scale to higher when needed. I'll have to look into that too :)