It seems Marcan managed to rebuild his DIY laser projector (which incidentally burnt out right after we saw it in action for its last public broadcast :D) and he's recorded a new, crisp and clean video of the output:

I hadn't noticed some of the details when I watched it at the party, such as the cube edges morphing into some kind of connected curves after a while, and it's generally cool to appreciate shades of green anyway. Besides, phosphorescent green is retro, trendy, and I love it!

Here's the video of the demo live at the party place:

A laptop computer was in charge of playing the audio, computing the visuals and sending them to the laser projector. Initially they were going to generate the audio in real time with a software synth as well, but they ran out of --guess what?-- time!

The audio was sent from such computer to the main audio mixer (which was like 30 metres away!) using an Ethernet network cable and a nifty connector he had soldered with a couple spare parts he had around --trust me, this guy is the real McGyver! 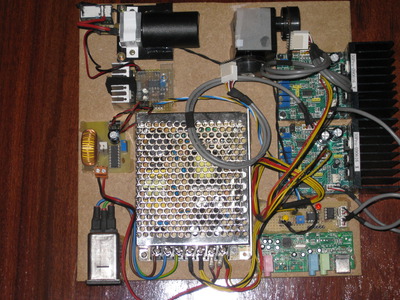 two galvanometer based servomotors with closed-loop position control [...] The engines (+drivers) come from a kit, the rest is pretty much homebrew (a heavily modified USB 5.1 sound card used as DAC, and the laser itself which is a DealExtreme pointer with its driver replaced by one designed by me). Software is 100% homebrew

On the raster to vector algorithm he's using:

He's made another test with a different input video (feeding the projector with libavcodec, haha) and the result is pretty nice too.

This is the original video:

All in all, awesome work.

I'm looking forward to their next inventions, and actually we can already have a peek at what marcan's working on at the moment: the PS3 Linux netbooter, python bindings to chip families I've never heard of, and other incredibly esoterical stuff... if it's odd and/or arcane, it's surely there!