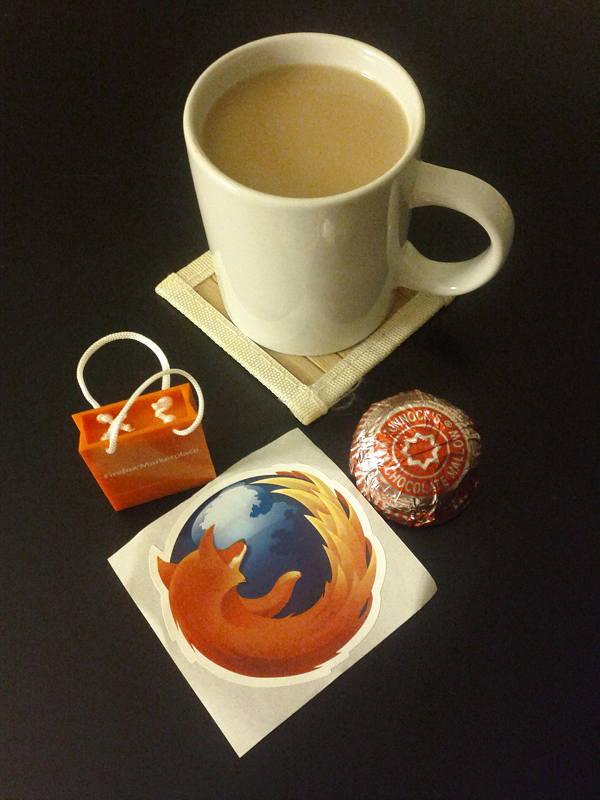 I had been toying with the idea of applying at Mozilla for some time already, but what completely convinced me to do so was going to the Firefox OS app day event, back in January, and experiencing the great atmosphere there. I spoke to several mozillians while in there, and I loved that while being super knowledgeable they also were accessible and, generally, people you'd want to work with. Nice folks, in short, working towards a noble goal? That was the trigger. No more toying with ideas; time for action.

I'll be working in the webdev team, which is vague enough to give you a rough idea of what I'll be doing (i.e.: no, I won't be working on Firefox itself), and also allows me to surprise you with whatever we come up with. It could be anything, as long as it's cool and for/in the web ;-)

I haven't met all my future team members yet, but the ones I've met are knowledgeable and fun as well, and if I tell you that I've learnt quite nice stuff during the interviews already, you'll understand why my thirsty-for-knowledge brain is very excited about all this. Mozilla are really innovating and pushing the web forward while at the same time keeping it open and interoperable (e.g. asm.js), and about every week I find about some other web superstar that I've long admired and has joined Mozilla too and I'm like: and these are going to be my co-workers!??! Is this for real??

I seriously hope my head doesn't grow in order to accomodate my expanding brain!

Regarding the location, I will be based at the London office, so I'll be able to contribute to the monthly Beer and Tell event whilst having a nice cup of freshly brewed tea and some yummy scones. Or tea cakes. Or maybe... err... an ale, or a cider. Ahem!

And that is all I can say for now! Stay tuned for more awesomeness!

P.S. I already told this news to some people in real life, and they took the opportunity to treat me as an organic bug tracker for reporting bugs and their personal gripes with Mozilla products. Please don't do that! Effective and executive as I might (sometimes) seem, I'm not a Bugzilla incarnation! If you have any issue, the best thing is to report it directly in Bugzilla. I have done it in the past and it really works!