Yesterday, I was asked for my favourite museums in London. It is hard to decide, as there are museums for every mood, so to speak, but I said that my favourite ones were probably the British Museum and the Tate Modern.

Then my colleague just made an expression of disgust:

If your mind is just not into being open, it's going to be hard to explain modern art, or maybe anything abstract, simply put; and maybe we would just run out of lunch time. So I just said that I guessed you had to be into that. That clearly wasn't enough:

OK... but what I find about this museum... about the whole thing... is that I could do the same, and... how you seen that thing with ventilation ducts...? 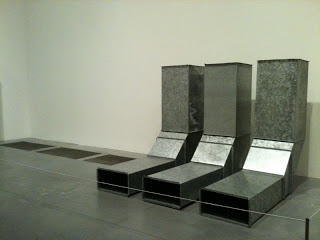 Picture from the MONOCHROMATIC AXONOMETRIC blog--thanks!

I've heard this argument so many freaking times before, that I always have the answer ready to be fired, and no regrets about dropping it in the middle of the discussion:

Yes, but you're just not doing it

Some more mumbling ensued, and the attack on abstract art finished after a while.

Still, I think the message is so incredibly important, specially in this time and age in which everyone not only feels entitled but is also encouraged to criticise every single thing by means of comments, tweets, etc. Most of the negative criticism takes the "I could do it myself" or "My five years old could do it" form, still it never happens to materialise. We never see the works of such unknown masters. Why?

Let me propose you an experiment: next time you find that something is "so bad you could have done it too", try to copy it. Study it. Do actually look at it. In the process, you will probably...

The beauty of this experiment is that first and foremost it converts you into an active person. You're not just letting something pass in front of you; you're intently engaging with it and focusing on its qualities. This is a very good brain exercise for starters. Secondly, it will make you realise that critics mostly love to point technical flaws but most of them are yet to produce a single work.

Once you complete the experiment, you will be on the other side of the line: the maker's side. You will be no longer a cheap critic pretending to be funny and clever by means of dismissive words about somebody else's creations, but someone who's been to Creativeland and is back with something in their hands. This is absolutely enlightening.

At that point you just need to ask yourself: which sort of legacy do you prefer to leave, words of disdain about somebody else's work, or your own pieces of work?