This was an "old" pocket camera mrdoob bought back in 2004. I quite liked it, but one day we went on holidays, found out we had forgotten to bring the camera with us, and I ended up buying another pocket camera, thus relegating the T1 to perpetual oblivion.

Which was a bit of a shame, since it was quite a nice camera. Its start-up time was insignificant, because the lens is not retractable--you just slide the cover down and it is ready almost instantaneously.

Some months after, I found again the camera in the shelves and turned it on (after recharging its battery, of course). Imagine my surprise when I found out that it didn't work anymore. Well, actually it did turn on, and you could browse existing pictures, and navigate the settings, and everything worked, except that all the pictures that you took came up black.

It was something quite odd, because we hadn't knocked it hard (or knocked it at all). But a quick visit to google confirmed we weren't alone in this. Many people had experienced the same, so much that Sony had been forced to do a recall of those devices and offer a free repair, even if the warranty had expired (which was totally the case). I looked at that option, but it was a bit of a hassle. You had to properly and safely package the camera, send it somewhere to a Sony repair centre, and cross your fingers that it would qualify as a "free repair", and then maybe they would repair and return it to you without no extra cost. Or maybe they could decide that it wasn't a CCD failure, and ask you to pay for the fix, or send it back--and ask you to pay for the return post.

Also, you had to weight the cost of packaging it and sending it securely, plus the time it takes to do so. All in all, it wasn't much of an attractive option, so I kind of forgot about that, and quietly returned the camera to the shelves again... until recently.

I was casually browsing ifixit, mostly because--I must confess it--I like seeing what's inside the machines, but I usually don't take them apart unless I have a good reason to do so (i.e. they don't work properly). You know, if it works, don't fix it, and all that.

I found that they had guides for repairing cameras, and since those are such a delicate type of equipment, I felt curious about that. And finally ended up remembering we had this somehow broken camera here, and wondered if there was a repair manual for it. And yes, they had a section for the T1. And they mentioned the typical faulty CCD sensor, and how to replace it!

It didn't seem hard, and didn't involve desoldering or soldering, so I decided to have a go at the repair myself.

First thing was finding the replacement part. Some people suggested buying a faulty camera from ebay and attempt to use its sensor, but that was a bit like playing a lottery--maybe it had a broken sensor as well! The ifixit guide pointed to a shop in USA selling those parts... from recycled cameras, and while they might have verified the parts, they might stop working somehow soon too.

I kept searching and I finally found a couple of guys selling that part in ebay. They were based in Hong Kong, and mostly had good reviews. It was cheaper to buy that part from Hong Kong than simply sending the camera to the repair shop in the UK, so I thought I would risk it. I bought it and hoped for the best--i.e. the part actually arriving here, preferably this year.

That was sometime in March. Two days ago a small padded envelope showed up in the post and surprised me, because I had slightly forgotten about the entire thing. I had a look at the envelope and confirmed it came from Hong Kong, so it had to be that. I was super excited!

I also noticed it was marked as "gift", which as I understand is a usual procedure for preventing customs from charging any tax or similar... and the funny thing came when I finally opened the envelope: inside it was a meticulously bubble wrapped item (which I assumed was the CCD sensor)... and a gift box, with lace and all! 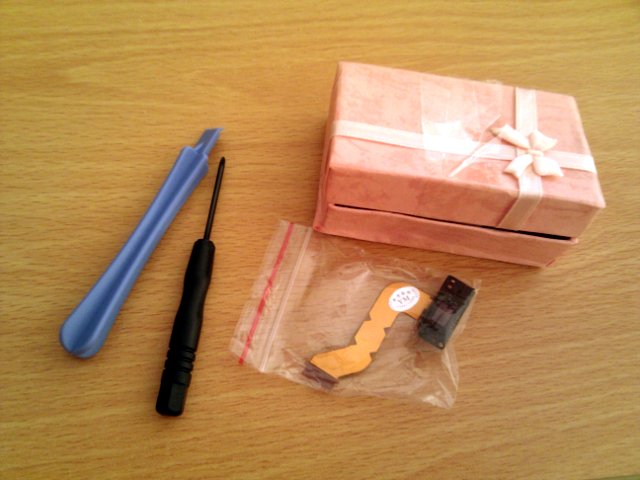 When Chinese people say something is a gift, they really mean it!

Turned out I was wrong about the contents of the pack. The CCD module was inside the gift box, and the bubble wrap contained two accessories I wasn't expecting: a handy screwdriver exactly sized for a couple of screws in the CCD module, and another tool for yanking the ZIF sockets open, although I didn't use this one because my nails were a higher precision tool in this case ;-)

The repair itself was straightforward. If you know what you're doing, it takes like two minutes to open the camera, then another two minute to disconnect the ZIF sockets and remove the CCD block. Around eight minutes to remove the old CCD sensor (because it might be taped to the block, so carefully removing the tape takes time), and three minutes to put into place the new one. Then two minutes to assemble everything back again, and you're done. Total time: 2 + 2 + 8 + 3 + 2 = 17 minutes. But since I didn't know what I was doing, it took me a little bit more, specially the disassembly and locating components part.

I pressed the shutter button.

With trembling hands (excuse my poetic license, ok?) I pressed the review button. I thought I was on the verge of fainting (my poetic license still applies). I closed my eyes during the short moment that went from me releasing the review button to the camera actually showing the last picture. I felt scared about opening them and finding a black picture in the camera again. But...

No more black pictures! It worked again! And the pictures seemed decent as well, with no stains or dirt in them, as I had been very careful about not touching the internals with my fingers (the eye of the camera, so to say).

So if you have the same problem and don't want to throw away your camera, I totally recommend you to repair it yourself. Yes, it's an old camera, so what? It still takes better pictures than most recent mobile phones, and this way you don't contribute to the landfill, which is a very sensible thing to do.

And by the way, if you haven't read it yet, here's the DIY manifesto, to which I totally subscribe. Bring on the DIY repairs!