This has to be my most eventful holiday journey yet. First, my suitcase's lock decided it would not to open again even if I entered the proper combination, and I had to pull the zips open using a screwdriver when I arrived home. I still don't know what happened, but I don't think I'll be using the built-in lock again, unless I plan on bringing a screwdriver with me at all the times too --maybe I could place it on one of the external pockets! At least I'm glad I didn't have to destroy the lock and thus the suitcase doesn't look vandalised, as I'm a firm believer in the broken window theory. Then, this morning we went to the open country to have some clean, unpolluted air, and all that, and just as I was approaching an aromatic bush to touch one of its leaves and thus release its fragrance, a snake popped out from the base and started to go round the bush. I began shouting just as you'd expect any city person to shout, and almost fell downhill as I was in a somehow steep slope. Then the snake hid under the bush, and since no one else had seen it, they wouldn't believe my story about a large snake... until it went out of its hiding again. This time my sister got all the goose gumps, but I was brave enough to take a picture of the snake before it ran inside a hole between rocks: 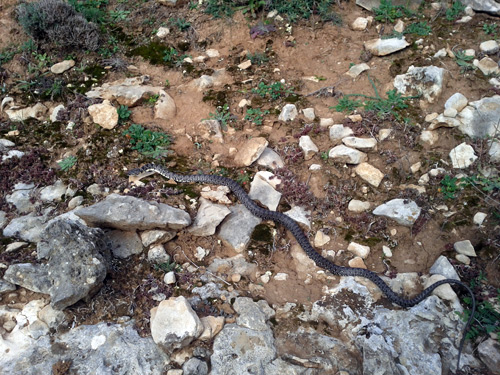 Later, just as I was still a bit agitated after all those wild life emotions, I realised I had forgotten what is probably the most important thing I could forget when packing: the laptop's power adapter! After repeating to myself "it can't be, it can't be, it's impossible" several times, and emptying my backpack in despair, I even looked for sellers nearby. Maybe could get an spare charger? Ha! The only thing I could find was a classified ad for a second hand Mac OS Tiger license. RIGHT!

I could try and travel to Valencia and back again tomorrow, but I'm not doing 170 km for a couple of days only. After all, I'm back on Sunday, so it's not worth it. Still, I feel pretty silly; it's the first time I forget an adapter ever!

Although what looked like a bane turned into a blessing: I had brought my old PowerBook G4 too, as I have been wanting to digitalise old cassette tapes, and the combined audio input/output jack on the Macbook isn't as "Pro" as the PowerBook's dedicated line input. So here I am, writing like it's 2010 again, and I'm rocking a G4 processor... which enables me to proudly shout INTEL OUTSIDE! (actually, that sounds more like it's the 90s back again and we're in an Amiga vs PC war, but hey).

It's been odd to go back to pre-Chrome times. Firefox was still at 4.0 beta 2. Safari displays that wall of websites they were so proud about back then. It felt like dressing with clothes from yore: they are solidly built and there's nothing wrong with them per se, but feel a little outdated when compared to what you're used to. Hence I tried to get an updated version of Firefox but apparently they abandoned the G4 ship in --precisely-- Firefox 4. Boo boo!

Thankfully there's still a loyal mass of Power-users (i.e. the PowerPC users) that keep maintaining a fork of Firefox for PowerPC which is as much in sync as it can be with the upstream version, and they are even optimising the code so that the Altivec parallel capabilities are well exploited. For example, JPG decoding is accelerated this way. The project is called TenFourFox --Firefox for Mac OS 10.4-- and works really well. In fact, I've been using it the entire evening and it hasn't crashed once, whereas the Firefox beta did, a while before.

And why did I say the bane was a blessing? Because I had been meaning to clean up this laptop since I got the new one, so this has been an excellent opportunity to do so. I am already done with the Downloads folder; so far I've found a couple of unfinished potentially interesting songs, and several work in progress screenshots from my Visualising Tolkien project, which I did start during Christmas 2009, so this is already paying off. Oh and please don't ask me why were they there, I don't even know it myself :-)

Now I hope I don't have any snakey nightmare tonight!