I seriously intended to write three (three!) blog posts past week-end but I got dragged outside to experience the British Spring in London, and its pubs and stuff, and I ended up not writing anything at all. But it was good because it was Easter and you're supposed to have a break sometimes.

Then I had this very intense work week here in Toronto which was full of discussions, pair programming, presentations, hack hack hackety hack, more discussions, and even a double session of bad 80s/90s movies to top that. The Mozilla Toronto office is packed full with so many rad people that great conversations happen all the time, so I didn't really have the time to write any of those three posts.

But I have some cool stuff to show/discuss, so there we go before I fly back to Europe:

First, just in case you're interested - here are the slides of my presentation: our projects, in the future. Without any context you won't actually get most of the points, but that's to be expected. I want to get back to this in a blog post because it's something that every open source project should be doing, so don't worry if you don't follow along.

My talk ended with me trying to plant two seeds in the minds of my team mates, the first one being that we should aim to be the open source developer we would like to see. So whenever you're unsure of what to do, pretend you're that ideal perfect developer and act as they would do. The second idea was an automatic "good open source citizen" ACID test, and hey, tofumatt and me hacked a prototype together. Here's acidity, which you can also install with the node package maid with

then cd to any of your projects and run acidity, and maybe you'll get some cool emoji.

Also, not something that I took part in, but Potch came up with a nice hackxperiment which enables you to write CommonJS-style code in WebWorkers, with the notion of making it easier to move more business logic into Web Workers so that the main thread is snappy and responsive. He also happened to say "Shadow DOM" out aloud and BAM! Angelina Fabbro (from Inspector Web and the mystery of Shadow DOM fame) entered the room. Was this staged? We'll never know.

Another ultraexciting thing that happened was that I finally had early access to the brand new App Manager in Firefox's DevTools. With this version you can create new Firefox OS apps straight from its interface, edit them, open existing projects, deploy and debug them, etc. The UI is way (WAY) more streamlined now---you don't need to switch back and forth to go from debugging to deploying, and you can simply use some natural shortcuts: CTRL+Save / CTRL+Reload. This makes developing privileged FxOS apps really webby and it feels GREAT. Here's an early screenshot so you can drool: 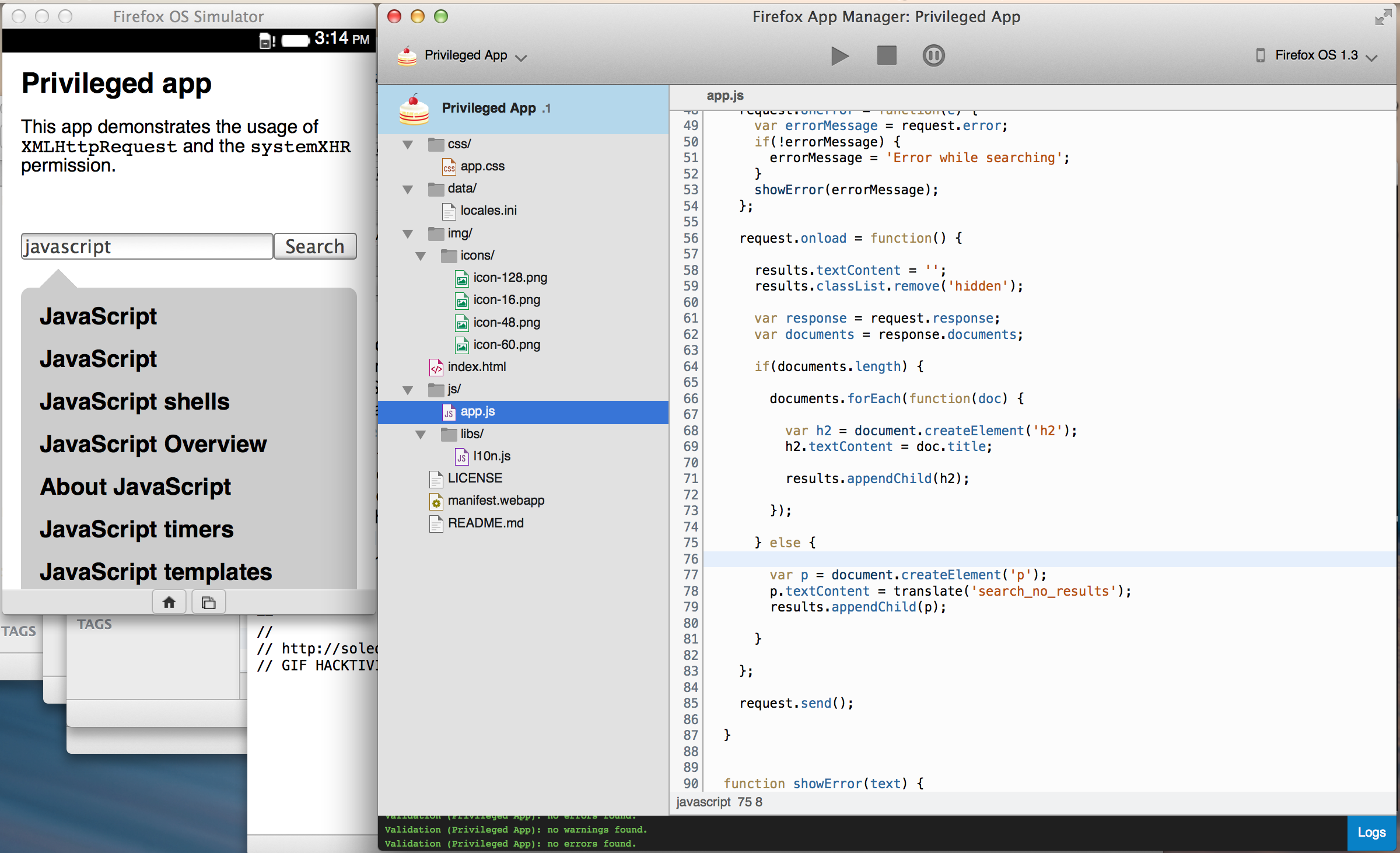 The way I got access to this version was by checking the code out of Paul Rouget's Firefox branch and compiling it. I'm told I was the first person that run this new AppManager apart from its own developers, so I suppose that means ACHIEVEMENT UNLOCKED. Paul warned me of some potential weirdnesses but I couldn't reproduce them.

For those of you curious, compiling took about 30 minutes and 5 Gb of disk space, on a MacBook Pro. I'm told that subsequent compilations should be way faster but I haven't got to that yet.

More cool things from this week: I will be mentoring a Google Summer of Code student this summer! The project is about Firefox OS games. Isn't it exciting?!

We also had a mini meatspaces meatup with some great Torontonians, where it was decided in a sideway non-important comment in passing that Toronto should be renamed to City of FOMOnto. Note to non-insiders: FOMO = Fear Of Missing Out. Fun fact: I used to think that FOMO meant Fear Of Making Out for a long time.

Now if you excuse me I have to perform some ~ and fit all my stuff back into the suitcase. Stay tuned!